About Our Asset Rating Framework

Importance of the Howey Test for Classifying Digital Assets

The definition of “security” under the U.S. federal securities laws expressly includes items like stocks and bonds, which most people would recognize as securities, but also includes the more expansive concept of an “investment contract” which is intended to capture other instruments that have the defining characteristics of a security. Because digital assets are generally distinct from traditional securities, determination of whether a digital asset be deemed a security typically focuses on whether or not the digital asset is an “investment contract”.

The “Howey Test” has 4 primary components, (i) an investment of money, (ii) in a common enterprise, (iii) with an expectation of profit, (iv) solely from the effort of others. All of these factors must be met for something to be a “security”.  In the context of digital securities, the SEC has expressed the view that the first two prongs are generally met, and the third and fourth prongs are the most important. The Framework evaluates each of these prongs; you can see the full scorecard which contains additional details on these components below:

A sale of a digital asset for money or other cryptocurrency is generally viewed as sufficient to be deemed an investment of money. Although not literally “money,” the SEC and some case law also views other forms of non-monetary consideration as potentially being an investment of “money.”  The framework considers factors such as whether the digital asset was sold in a public or private token sale, earned through mining or provision of a service or “airdropped” for providing KYC services or wallet information, in addition to other factors.

Common enterprise.  One common definition is called “horizontal”commonality whereby purchasers pool their money together to invest in a project, but there are a variety of tests and interpretations by different courts. The framework asks questions related to whether holders of the digital asset share increases or decreases in the value of the asset or receive fees as a result of holding the asset, in addition to other factors.

This is one of the defining features of a security, but the answer may not always be straightforward, as purchasers can acquire a digital asset for a variety of reasons such as (a) use for a specific intended purpose, (b) out of the belief that the digital asset will grow in value over time, (c) or pure short-term speculation. The framework looks at a variety of factors such as whether the holder of the digital asset receives some type of return (whether through interest, dividends, rewards or buybacks intended to drive appreciation), whether the token was marketed in a way which could create expectations of profits through use of language expressly associated with securities or implicitly suggesting an increase of value by highlighting efforts to increase the value of the projects.

Solely from the efforts of others

Just because purchasers expect a profit from acquiring an asset, does not by itself mean it results from the efforts of others. It must also be dependent on the efforts of “others” such as a promoter or third party, which in the context of digital assets may include the issuer and project team behind a digital asset. For example, purchasers of a commodity like gold may expect the value of gold to go up as a result of market forces of supply and demand without relying on the efforts of any person. Similarly, businesses regularly buy assets with an expectation of generating a profit from their active efforts utilizing an asset. The importance of ongoing efforts of an issuer and associated project team vary by digital asset and the stage of a project. The Framework asks a variety of questions to try to determine the extent to which purchasers of a digital asset would be expect to rely on others for increases in value, which includes factors like whether a digital asset and the platform on which it operates have fully developed their utility and are used by a material number of unaffiliated parties in addition to other factors.

Upon undertaking the review of a digital asset the CRC applies the methodology described below rendering a score ranging from 1 (least likely to be deemed a security) to 5 (most likely to be deemed a security). The CRC may modify a score in its sole and absolute discretion, for reasons including, but not limited to, pending regulatory actions or perceptions of harm to the reputation or integrity of the CRC. 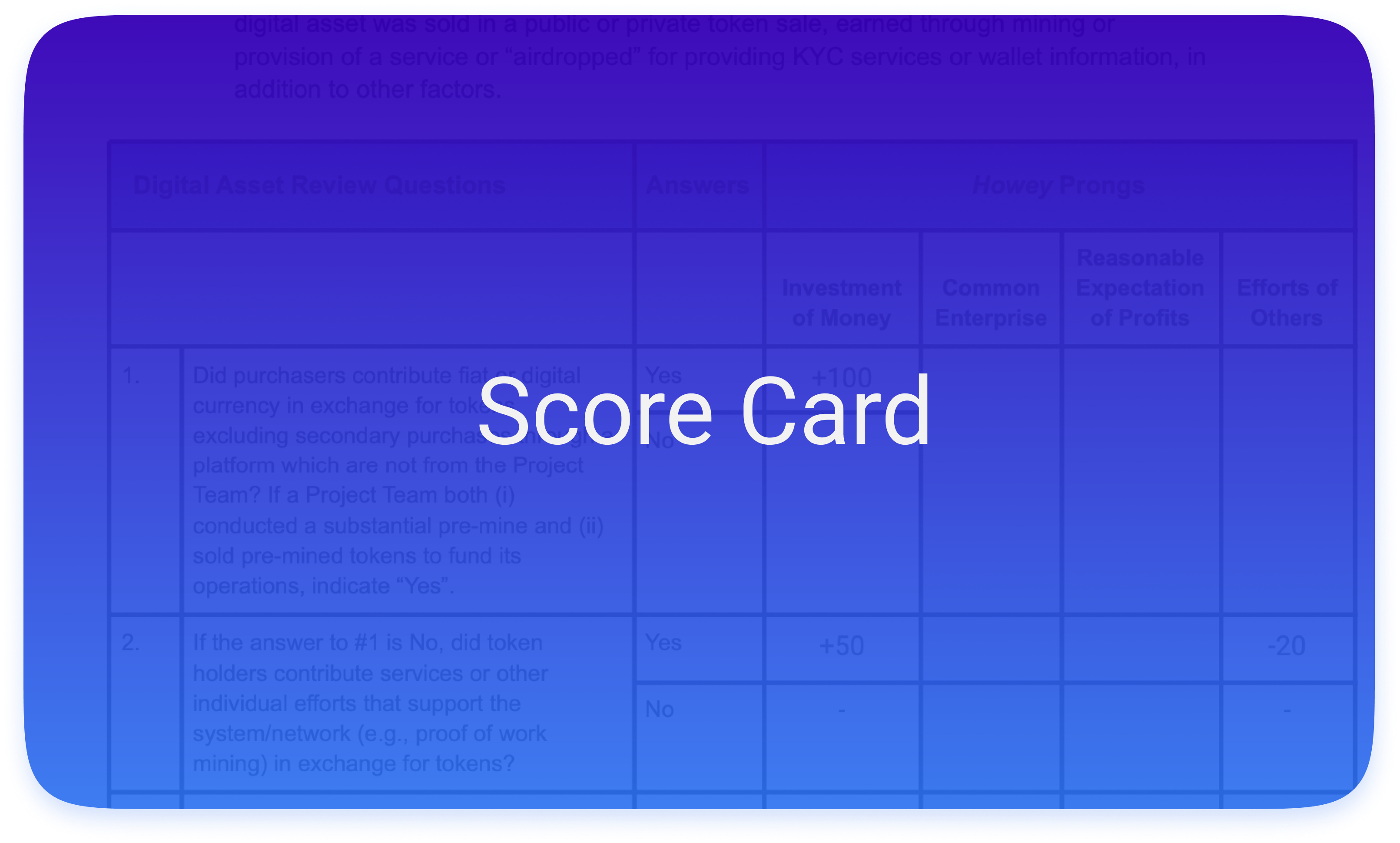